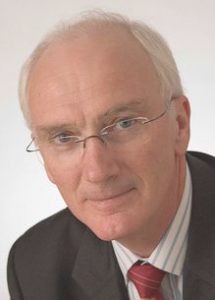 Professor Laurence Williams was awarded an OBE for services to radioactive waste management and nuclear safety in the 2018 Queen’s Birthday Honours List.

Laurence has a long history of engagement with research to underpin the safety of nuclear installations both in the UK and overseas. He also has interests in nuclear security, nuclear safeguards, governmental organisation for the regulation of nuclear industries; international nuclear safety standards harmonization; nuclear licensing; nuclear emergency planning, the management of radioactive waste; the tolerability of risk, the societal impact of the use of nuclear energy and the safety and regulation of fusion power plants.

Laurence was Her Majesty’s Chief Inspector of Nuclear Installations; Chief Engineer of the Nuclear Decommissioning Authority; Chair of the Defence Nuclear Safety Committee where he was responsible for advising the Secretary of State for Defence on the safety of the Defence Nuclear Programme; and Chair of the Committee on Radioactive Waste Management where he was responsible for advising the UK Government and the Governments of the Devolved Administrations on radioactive waste management.

Laurence is Emeritus Professor of Nuclear Safety and Regulation at the University of Central Lancashire; a Senior Research Investigator in the Centre for Nuclear Engineering at the Imperial College London; an Honorary Professor at Bangor University; the Ser Cymru Professor of Nuclear Policy and Regulation, a Member of the Singapore Nuclear Safety Advisory Panel, a Member of the Higher Scientific Council of the European Nuclear Society; a Senior Visiting Fellow at the National Nuclear Laboratory; the Chair of the Nuclear Institute’s Editorial Committee and the Chair of Tokamak Energy’s Regulatory and Safety Committee.

For over four decades, Laurence has contributed to improving nuclear safety in the United Kingdom and internationally. As Her Majesty’s Chief Inspector of Nuclear Installations, he was responsible for licensing all civil and some defence related nuclear installations in the Great Britain. He is regarded as one of the world’s leading experts in nuclear safety regulation.

He has extensive knowledge of working with Government and the Senior Civil Service on nuclear safety, security and radioactive waste matters. He was a member of the UK’s Nuclear Innovation and Research Advisory Board (NIRAB).

3. The Use of Hazard Ratings and Safety Performance Indicators in the Regulatory Inspection of BNFL Sellafield Site; Williams L.G. et al, OECD/NEA Paris 1991.

13. Safety and Security–essential ingredients in the use of atomic energy; Williams L.G., Energy World, Nov 2013

20. A Sensitivity Analysis of the Factors that Influence the Hazard Potential of Fusion Power Plants, Lukacs, M and Williams, LG Fusion Engineering and Design. Vol 164, January 2021