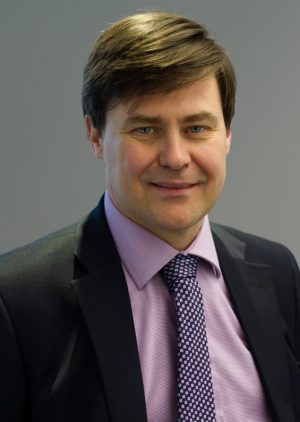 Having initially worked on a consultancy basis for Nuclear Futures Bangor in late 2019, Marcus joined officially as Reader in Nuclear Engineering from the new year 2020. He has since then intensely worked with developing the institute’s new Thermal-Hydraulics Open-access Research facility – THOR at M-SParc, the group in Reactor Design & Thermal-Hydraulics and other upcoming research projects.

He has a background of 23 years in the nuclear industry and academia, including R&D, new build, fuel & core support and plant operation. His previous academic research was focused on accelerator driven systems (sub-critical, source-driven fast reactors) for transmutation of nuclear waste, most of the research performed at CERN and culminating in his PhD defense at Uppsala University in 2006. During his 17 years in nuclear industry, Marcus has concerned himself with Light Water Reactor physics methods development and a broad range of their application. He also worked in operating nuclear power plants (NPP), primarily with physics predictions in combination with reactor core measurements and monitoring – but also in a variety of other settings like radiochemistry, waste handling and radiation protection.

Marcus relocated to the UK from Sweden in 2016 to work as the Senior Core Design Engineer and later Lead Fault Studies Engineer in Horizon Nuclear Power‘s new build project to deploy Hitachi-GE‘s UK ABWR. Central to his role were specialist support for physics and fuels aspects in the Generic Design Assessment process, which was successfully concluded by the Office for Nuclear Regulation in the end of 2017. He also took part in Horizon’s plant optimisation effort providing Boiling Water Reactor power uprate expertise for the Nuclear Steam Supply System. Between Horizon and joining Bangor, Marcus was also engaged in a project for Moltex Energy working with their Stable Salt Reactor design.

Marcus’ vision for the group in Reactor Design &Thermal-Hydraulics is to excel in the application of state-of-the-art predictive modelling methods to live reactor and general multi-phase fluid systems, while integrating with the purpose to develop adaptive logic systems interacting with process instrumentation and readout.  In an extension, these techniques can be applied to monitor operation margins and, for non-safety intensive operational actions, to control process.

In addition to his engagement in the UK nuclear new build sector, Marcus brings a wealth of experience from the international nuclear industry, having previously worked for major nuclear companies. He has assumed both specialist and operations related roles at Westinghouse Electric, Vattenfall Forsmark NPP, Olkiluoto NPP and Loviisa NPP. The NPPs he worked at house some of the world’s absolutely top performing units. He has supported operating plants in Sweden, Switzerland, Finland, the US, Spain and Japan.

We use cookies on our website to give you the most relevant experience by remembering your preferences and repeat visits. By clicking “Accept All”, you consent to the use of ALL the cookies. However, you may visit "Cookie Settings" to provide a controlled consent.
Cookie SettingsAccept All
Manage consent