Congratulations to KESS2 PhD candidate Megan Owen who has published her first paper in the Journal of Nuclear Materials!

The Nuclear Futures Institute is very pleased to announce a new publication by PhD student Megan Owen, the paper was co-authored by Michael Rushton, Lee Evitts, Bill Lee and Simon Middleburgh. The paper was published in the Journal of Nuclear Materials.

Megan’s paper examines how Grain boundaries in ZrO2 may act as favourable pathways for species, such as oxygen and hydrogen, which play an important role in corrosion when compared with volume diffusion through the bulk of the crystalline material.

Megan’s work focussed on modelling amorphous networks of both undoped and doped lanthanide doped ZrO2. Diffusion was analysed in both systems and the results were compared to crystalline systems where appropriate.

Voronoi analysis was also performed and was used to determine structural coordination numbers and the atomic volume of each species. An atom’s Voronoi domain represents the volume of space that is closer to the atom than any other.

When considering the impact of amorphous ZrO2 in the nuclear environment related to complex grain boundary phase formation, Megan’s results provide a fruitful avenue for further investigation, and we look forward to seeing what will come next of this research. 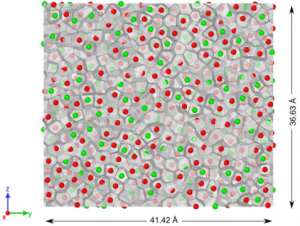 Figure 1  – Voronoi domains (shown in grey) surrounding the atoms in a 5 Å slice parallel to the yz plane of the undoped amorphous ZrO2 system at 300 K (where O=red, Zr=green).