Dr. Michael Rushton and Prof. Bill Lee have had the second part of their  nuclear co-generation article series published in the Nuclear Institute’s Nuclear Future magazine. It is called “Co-generation in the early-days of nuclear power in the United Kingdom Part 2: Metal Production” – and can be found in the January/February edition (member login required).

Nuclear cogeneration is where the heat generated by a nuclear power station is used not only to generate electricity, but to address some of the ‘difficult to decarbonise’ energy demands such as domestic heating and hydrogen production. It also enables a nuclear plant to be used more flexibly, by switching between electricity generation and cogeneration applications.

The article discusses how the UK’s 2050 net zero target will require deep decarbonisation of all areas of the economy which provides tremendous opportunities for nuclear technology.

The fact that smelting and re-melting metals accounts for a considerable portion of the world’s primary energy consumption and is responsible for almost 30% of industrial carbon dioxide emissions. The article discusses how nuclear and hydrogen power are set to play a key role in reducing this. 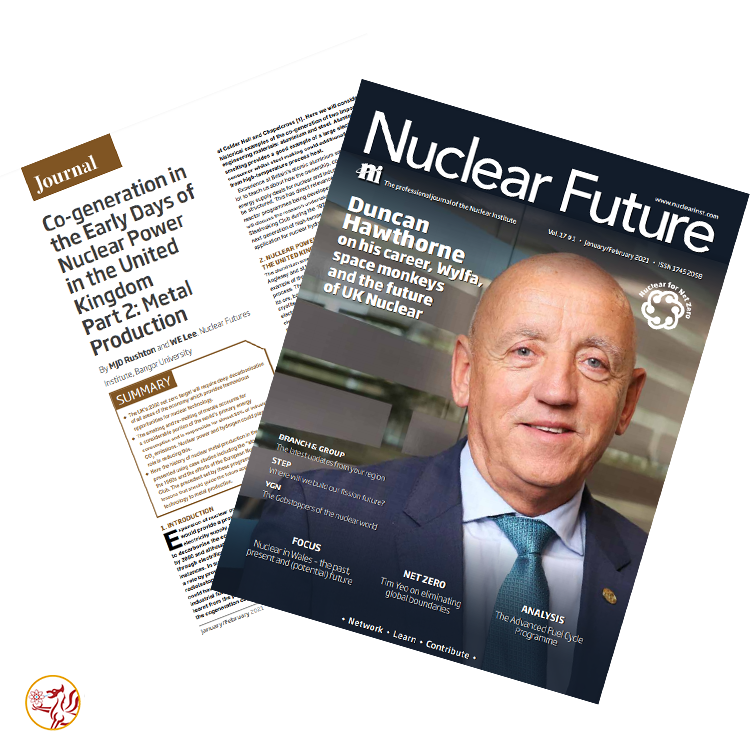 Tags: Bill Lee, Co-generation, History, Media, Michael Rushton, Nuclear Institute, Publications, Webinar
We use cookies on our website to give you the most relevant experience by remembering your preferences and repeat visits. By clicking “Accept All”, you consent to the use of ALL the cookies. However, you may visit "Cookie Settings" to provide a controlled consent.
Cookie SettingsAccept All
Manage consent